I had a 1600pt game a few weeks ago now in preparation for the MAWs tournament. It was at my Local friendly Neighbourhood Gaming Club and it was, I believe, my first game against Dan who started playing at the club round about the same time as me. He was using Space Marines but he also has a Dark Angel force, it was his Deathwing squad with Belial that I repositioned atop a building with no one to fight during our last club Apocalypse battle.

Anyway, there's not much to this battle report at all, sorry, but I felt ﻿it was important to share because the primary reason for this was my own attitude. Dan's a follower of the Facebook group so I hope he has no issue with this, he was a perfect gent and although I don't feel I spoilt the game I know inside I felt like a brat and I'm ashamed of that. What we have below is the situation after my first turn [ignore the alien in the bottom of the picture, my camera app did that]. As you can see everything is pretty much charging forwards and Dan has put a drop-pod down in his turn. Of note is the Trygon behind cover next to that objective in the centre of the board [I think we were playing Big Guns, which is why the Biovore is also holding and objective bottom right]. 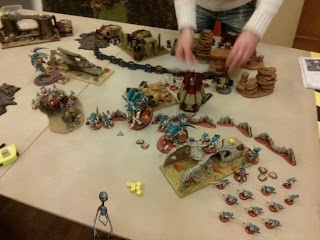 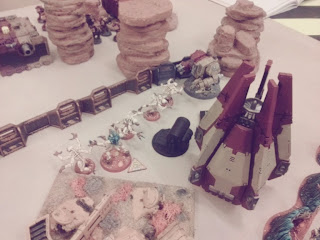 Three Vindis with two wounds on the middle one. 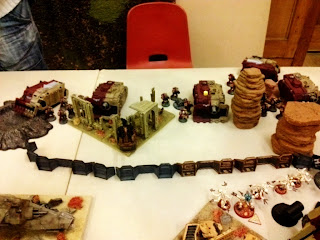 So here's where I suck, this is Dan's turn one and his Librarian has driven forwards in the Rhino, used Psychic Shriek on the Trygon and I roll 3D6 for my Leadership and get 14! So instantly 6 wound Monstrous Creature is dead, no saves, no cover no nothing, Deny the Witch - fail, gone. To say I was put out was an understatement. What was I thinking? How many times has the Doom done similar to my opponent? They've suffered that and carried on playing, what happened to playing for fun? What happened to 'I don't care if I win or lose', this was a spectacular way to go and a valuable lesson, both in the power of Psychic Shriek [the Doom can take this as standard!] and not to underestimate my opponent and their psychic abilities. 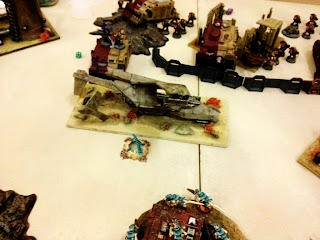 So it was a difficult first turn and my attitude was soured but in my defence I'm sure I could have overcome this a little easier if a spectator wasn't constantly volunteering advice to Dan. I think even at this early stage it was evident he could hold his own and was doing so spectacularly, he's no beginner by any stretch. Having to come to terms with a heavy loss so early is difficult but feeling like you are being ganged up on as well makes it just that bit harder. 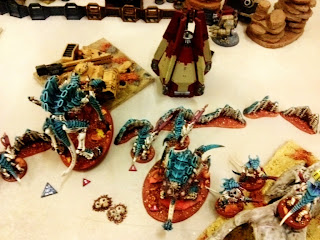 However, this was a valuable lesson for me, I've been too confident and perhaps masked my ego with a public display of 'sportsmanship' that perhaps was less genuine than it should have been. I'm not sure what the end result was, ﻿it's not really relevant but I hope my inner turmoil didn't spoil the game for Dan, he was a perfect gent and a genuinely nice guy and good player. If he is reading, apologies if I came across badly, you played a blinder and I appreciate what I will take away from this, good and bad.

Ultimately it was a learning experience for me and perhaps us all, which is why I've shared perhaps the worst of my behaviour. I hope I can move forward with that attitude of having fun, remembering that these games are still learning experiences and if someone is getting unrequested advice, it's so they can improve and be more challenging, much in the same way we did our kendo practices.
Posted by 40kaddict at 12:49