Terrain is Everything - Tournament Terrain

One of the last suggestions I had for other people's Old Stuff on Old Stuff Day was synaps3 guide to Terrain at synaps3 I had though about doing a post about terrain and 'tournament terrain' but after reading his post I thought he'd pretty much said it all. However, I then entered into my first tournament and also read SandWyrms's review of the Indy Open and thought there may be a little bit to discuss.
My local friendly neighbourhood gaming club had the following tables set up [although I think one is missing] and for the most part I think the terrain is suitably diverse and sufficient. The first three tables are the actual tables I played on and as such I was quite happy. This one had plenty of terrain, not sufficient to hide a Monstrous Creature but I got plenty of saves off it so that wasn't too bad. 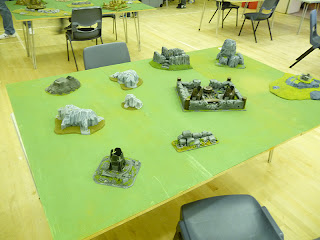 Equally I had some nice things to hide behind here and finally playing on one of the 'red planet' boards was a treat. 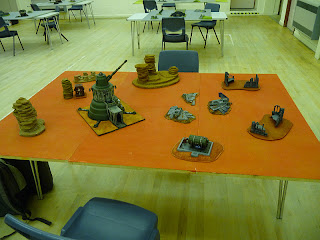 This Cityscape was deceptive in that the amount of cover anything in the middle a sitting duck but the variety by this stage was quite welcome and although I struggled to find a way around the board, especially with deep striking Trygons and Spores it was great fun to have so many buildings on display. 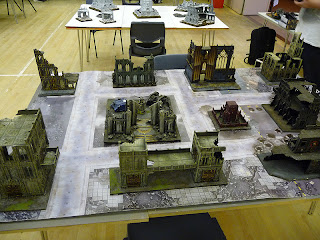 Not so sure how I would have got around this table, most of the terrain is hugging the edges but I suppose if you're fighting for objectives the board may end up playing very differently. 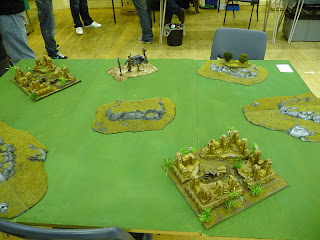 As a bog-standard tournament board I think this is probably a better set up. The terrain isn't all hugging the edges and the central bastion blocks enough line of sight to allow those with an assault foot list to actually cross the battlefield without being totally shredded, at least that's the impression I get from it. 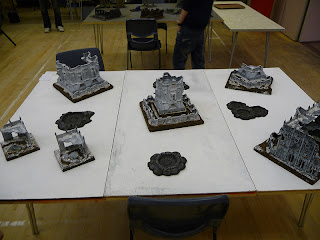 As you can see without that central piece there's a killing zone in the centre of this board but the other terrain is sufficient enough to allow you to flank in cover. From my perspective that cover in the bottom right is wasted but I imagine a Devastator squad may find it useful to hang around there. Without any hills to worry about high ground isn't too necessary and although the building on the left would make a good vantage point you'd probably still have to move them first turn to get up to the roof edge. 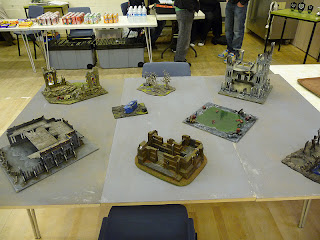 Oh dear!? The very though of this fills me with dread and I have to admit I'm glad I didn't play on it 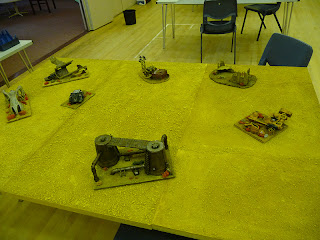 However the club did take a picture of this table during a battle and perhaps the fact it is very short on terrain allows a certain type of army to benefit, where boards like the Cityscape reduce that effectiveness:

So what's my beef? None really, the tournament we held had a variety of terrain, some that was uniformly spaced, some﻿ that had adequate cover, some more or less so but ultimately there was diverse battlefields much like reality. How many historical battles have been won and lost thanks to mastery of the terrain and invariably that didn't amount to a large piece of LOS blocking in the middle and four or six pieces surrounding it. Of course if we go back to the Indy Open pictures you will see a lot tables with far less variety and imagination in the setup but there were 64 entrants so that terrain has to go a long way.
My big question is - why the importance of uniform terrain layout to create a 'balanced' playing field is a primary consideration? I think I'd much rather have variety and a challenge from using the available cover than rock up to the same pieces in the same positions table after table.
Posted by 40kaddict at 13:02