Another look back at some of my ebay sales. Here's most of my Squats, some still on sprues. Sadly the Squat Hearthguards in Exo Armour are not shown and actually I can't find any pictures of them either, one even had some sort of laser lance although I can't remember how many I actually had, 3, 5, I'm not sure.

These I think were going to be my first army becasue they were as cheap as the plastic Imperial Guard and just a little bit cooler. Most of the flak armour was going to be black, with light blue shirts and orange helmets, shoulder pads, boots and webbing. My ultimate goal was to have them riding hover boards like some weird band of galactic surfer dwarves, cowabunga! I was going to get Magnumm Ice cream sticks and cut them down for the boards. As you can see that never got past the ideas stage. You can also see there's a couple of missing heads that have been replaced with the old Warhammer Armies boxed set. Also of note are the heavy weapons trike and my unique Squat War Walker! 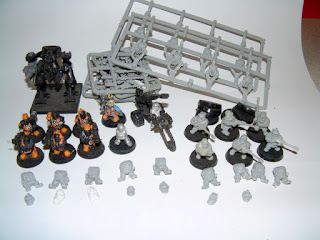 Yep, anything those space elves could do the space dwarves could also manage. The Squat War Walker was made out of my old favourite Chaos Dreadnought from Space Crusade. A simple vertical cut through the top part and some Milliput for a padded reclining control chair and the Squat operator fit perfectly. Sadly the undercoat doesn't show up quite the simple perfection of this modelling but I still think it'd stand up well today. Who knows what the winning bidder did with it? Makes you wonder... 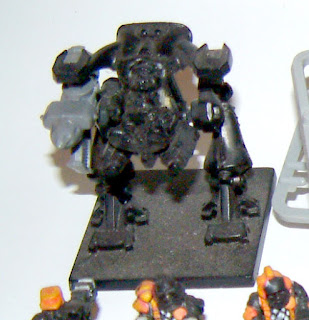 Anyway, this post was inspired by Draxius's blog YOU AIN'T SEEN SQUAT, which is all about the Squats so check it out.
Posted by 40kaddict at 16:33