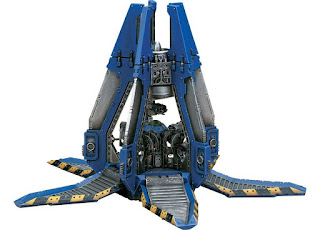 I write this blog in a weird way [I think], prepping many stories in advance because I had a years worth of experiences to get off my chest and a shedload of old miniatures to photograph. I hope the shattering of any illusions hasn't put anyone off the blog, it still leaves me with opportunities to move stories up or down the running order and interrupt my 'one day on one day off schedule' when there's big news. It doesn't really matter anyway because if I was writing articles on a bi-daily basis there'd be no stories at all, so that's the way it is, anyway...

However some stories do get missed or outdated, in particular I forgot to mention my good friend Pete got me a Drop Pod for Christmas. Now, bizarrely I didn't take any photographs of the construction process, it's almost as if I forgot I wrote a 40k blog. I'd read one decent review of the model and assembly and kind of felt another would be unnecessary. What I didn't do was try and find that review because I know it highlighted a number of issues with the model and perhaps a bit of understanding beforehand would have saved some frustration!

Anyway the Drop Pod currently is in bits. I have the passenger area and the five ramps in place with the 5 fins and the turbine separate. I think it'd be really difficulty to paint this fully constructed, this way may be easier but it's also a bit fiddly. Everything has been undercoated and boltgun metal applied where appropriate. I need to get some other metallic colours, copper, bronze etc. to make it suitably archaic inside.  There isn't much to see because the undercoat removes a lot of detail but here ya go. 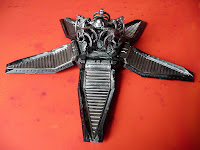 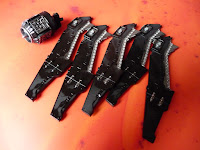 Overall though it's a nice model and although some bits fit nicely together the center console that the harnesses attach to tilts at a funny angle. There's a special harness with a skull on and that's supposed to fit at a specific point on the console. Of course when you realise that you've already glued the plain one in that spot! I think there was reference to that in the review I read but, as I say, I forgot where that was. It doesn't seem to have done any harm which begs the question why have it?

Pete was extremely kind to get it for me, he wasn't sure if I wanted one but pointed out that it could be scenery as well, a really decent objective to capture so I think it'll be a valuable edition. Of course drop pods are 15pts more for Dark Angels and only have the option of a storm bolter but there's definitely going to be something satisfying about putting one on the battlefield and unfurl the ramps after making 'explosive bolt' noises and having a squad of marines barrel out.

Here we go - here's the tutorial I should have re-read by teamsnakeeyes. For instance getting the boltgun metal onto the centre console before I glued the harnesses on would have been 'advantageous', shall we say.
Posted by 40kaddict at 13:17