First game of the year and it's actually first game of the season and my first ever game of new edition Blood Bowl. I say 'new edition', anything past 2nd edition is new to me. So here's some good old ES Posthumous to start the ball rolling.

PeteB and I began by trying to figure out the rules, which involved me saying 'an Action' a LOT of times. So we just set up the board, he was Orcs, I was the Humans. 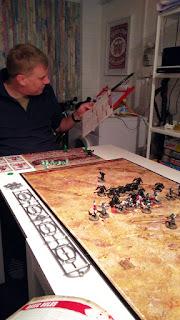 Worth remembering when you play Blood Bowl - bring a ball! I was forced to use a Space Wolf 'severed' head as a proxy. Still, probably better use of it than as an army! ooh, the kick goes wide. 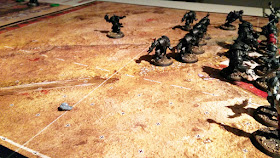 The Orcs bundle over to the side and is recovered by a lineman. Meanwhile in the centre of the field Blockers are failing to put down even a human catcher who just dances out of the way putting the Orc on the floor. In response one of the Marauder Blitzers puts an Orc in the hospital - that's painted miniature for you. Te rest of the team seeks to cover the left wing and the ball is fumbled. It scatters through the pack and ends up the Orc Thrower's hands. 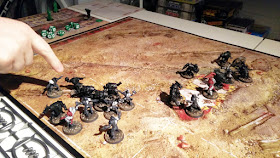 Usain Bolt like footwork gets me a Catcher in the end zone. Logan the Linebacker blitzes the Orc Thrower with the ball falling loose diagonally right behind him. 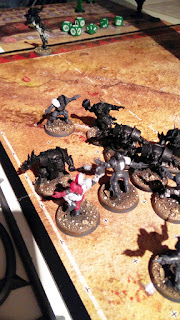 One of my Throwers scoops up the ball and I was convinced you can't pick up a ball, move and pass in one turn. Pete was insistent it should be feasible, even to the point where we played out what would happen - perfect pass, catch and score. But I said it wasn't we reset and my Thrower got sacked. 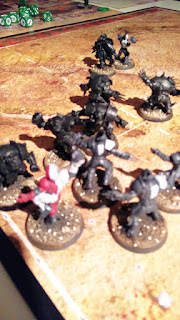 The ball continued to bounce around the Orcs and I tried to pick it up but with so many Tackle Zones my Catcher just couldn't do it. 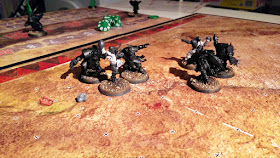 With only two turns left in the half Pete tried a long pass from downfield, his Blitzer ready to make an uncontested break for my end zone. But the Thrower fumbled, dropping the ball behind him! 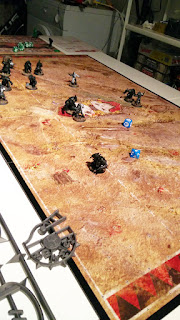 Some surgical blocks and blitzes managed to put down any Orc interference allowing my Thrower to pick up the ball safely. We'd now found out you can move, pick up and throw! With my catcher flat out on the floor it was up to Logan the Linebacker to head for the end zone. 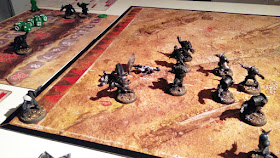 Luckily I got a reroll on my throw, thanks to skillz and it came in on target. Then Logan went to catch, failed but another re-roll made it a perfect catch to secure the game. 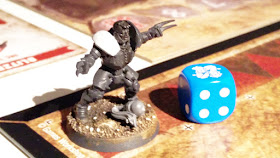 We had a great time, my most painted/decorated Blitzer got injured, alongside another player. Another Orc got Knocked Out by fans having been bundled into touch. There were some elements we weren't 100% happy with, it seems really difficult to put people down sometimes, thanks to Dodge and Orc Blockers not having the Block skill?! But we had fun and Pete is looking to repurpose some Khorne daemons and warriors as a team.