Probably because there are elements that are comfortably familiar the Aberrants continue to receive my attention. I thought perhaps the Bonewhite highlights would be sufficient effort for me to switch to another project but I think I may have reached a tipping point of focus whereby I believe the work remaining is sufficient that a concerted effort would finish them off 'tout de suite'. I mean I'm wrong, there's loads to do on them but it feels like the home straight. 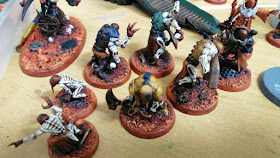 The Familiars are almost done, they need some detail on their loin cloths and faces, claws and detritus on the base but they're pretty close 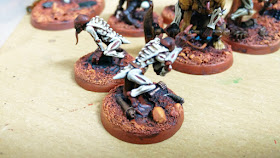 Aberrant and Primus have the Bonewhite, you can see in the background the Magus has had some basecoats applied to try to catch up and have the Broodcoven complete as a whole. You can also see I;ve picked out some the areas that will be black but most of the claws still to do. 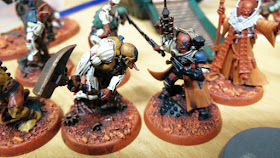 The following night I had every intention of not painting but I had to nip out and put some veg in the compost bin behind the shed and next minute I was painting the skin of these two. Now I'm not sure why I did this, I could have gone the easy route and done one of the other two but all these skin tones and Chitin plates took me an hour or two. Whatever, it was midnight by the time I was happy. 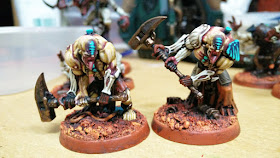 Now this isn't quite as pale a skintone as I can go, it started out as Vallejo Bronzed flesh, was washed with Army painter Soft and Strong Tone. Highlighted with Bronzed Flesh and a Pale Flesh I picked up. I think I'll do the Primus and Magus in Pale Flesh. These are quite yellow, which is cool, yet more diversity but I need to do some anaemic looking cultists too. I like how these have come out, particularly the red and purple elemnts help make the skin a little 'raw' looking and mark the join between human and xenos. I also highlighted the orange kilt[?] but tried to keep the bits on the bottom still quite grungy looking. 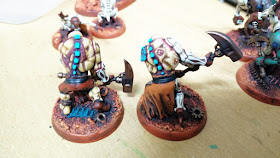 I added some very watered down spots of Khorne red on the head for skin blemishes. They look OK and help differentiate the skin from the Bonewhite a little. 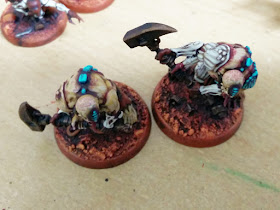 The paint strokes are really quite messy in places but I'm happy with that, the faces could do with more definition and I might add some more shadow around the eyes so I can pick out a yellow eyeball or two. I'll probably be adding some Tamiya Clear Red X-27 to the mouth as well - I want the idea that even if they're not hammering you with their mining equipment they'll just rip you to pieces with their teeth. 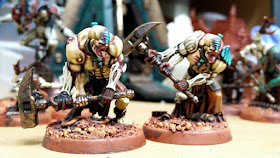 Progress - because I managed to get 90% of the skin tone on these two done, but slow progress. It's amazing how much I enjoyed this but feel it's such a limited part of the process that manages to take up such an inordinate amount of time. Anyway, I still have the other two skintones to do, then it's extra metallics on the weapons and their powerfields - I was originally thinking red but now pushing towards blue, like the ones in my crashed Aquila Lander. Then I need to pick out the mining armour plates and any other details, like chips on the base, teeth, tongues etc.
40kaddict at 12:13
Share