We left these guys particularly pale and interesting. Despite the pre-shading and zenithal highlights I was far from happy with where they were going. I had envisaged a reduce palette that was indeed pale but my natural desire for high contrast and the lack thereof in the white compelled me to add more shading. 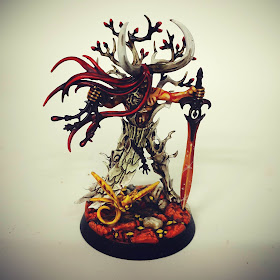 I mixed some Waywatcher Green Glaze and Army Painter Soft Tone together and washed it over the recesses and anti-zenithal areas. The green gave me a hint of 'mossiness', despite the fact the moss is orange on their bases! That extra tone has made so much difference in the models. 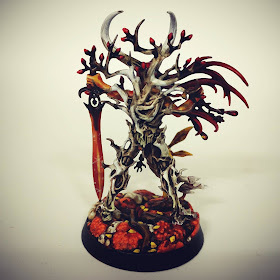 The 'amber' blades have also been highlighted [that white sparkle got a bit messy] but the Bloodletter Glaze has worked a treat and is a good alternative colour replica of the original green version [I think]. The fact these glazes have been replaced by Contrast equivalents is rather annoying as I was under the impression they don't mix with water/washes. 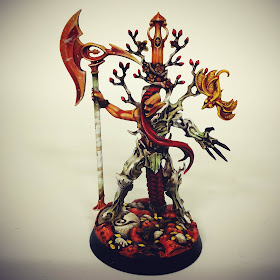 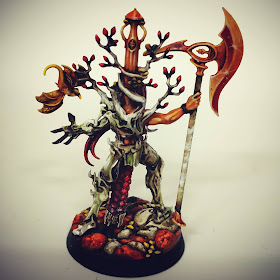 The yellow tree sprites have also come out OK. I had no idea what I was going to do with the originally but the yellow was a sensible choice and they could all theoretically be psychic manifestations hence why despite their different physiology they're all yellow. 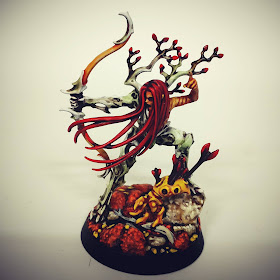 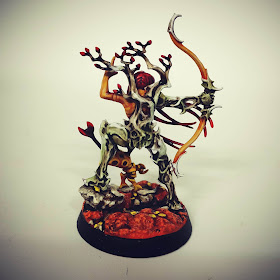 That said the washes have helped me to come to terms with her vine legs, I mean it's far from perfect but I'm hoping some subsequent highlights will help define all the details a bit more and bring it altogether. 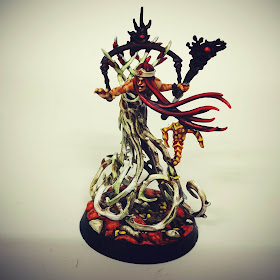 I also need to highlight all the dark wood elements too. 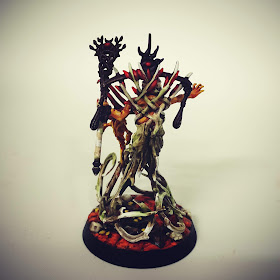 So, there we go, almost done and I can see the end now as things have resolved themselves.
40kaddict at 12:18
Share