It's a dangerous thing to trawl eBay the day after pay day but in fairness I don't think I've gone too overboard. I managed to pick up this bike and bits for two attack bikes for just £5.99! I'm thinking they might look cool on some Dark Vengeance bikes although I can't decide, given the DV bikes are leaning to one side, if I should re-pose the bikes or have the side cars cocked in the air like a puppy fit to burst :) Still, I'll need to get the DV bikes first but I thought this was too good a deal to pass up, the banner, extra rider and clear base just bonuses. 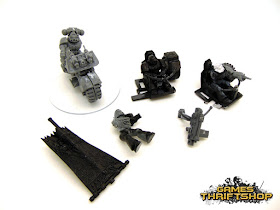 I then went looking for Tyranid bits. I had a plan in my head to convert some monstrous Deathspitters and some extra Scything Talons magnetised for bare-bones Screamer Killer Carnifex. I came across this auction for 'Warhammer 40k bits Tyranid bitz joblot Metal Broodlord' which had Deathspitters - check 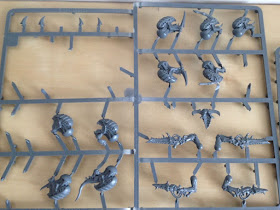 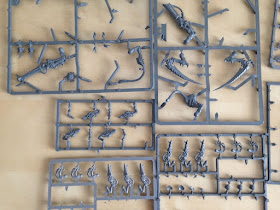 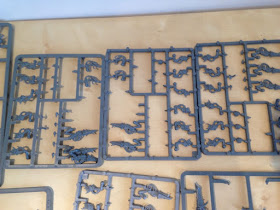 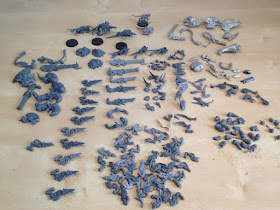 I suppose this must be the Broodlord then? A metal Hive Tyrant. Now the interesting thing is, I have a sets of plastic Hive Tyrant legs and extras not used when I made my Flyrant and another sprue the same from another bits purchase. Essentially I had everything to make a Tyrant and this auction was at 99p with one bidder and 20 hours to go. OK we all know that was going to change and it did. My winning bid was £10.51 with £4 postage, which I still think is good value and I got the added adrenaline rush from the auction closing. Sure I'd always imagined I'd get a 'start collecting' box to fill out my 3rd Tyrant slot and remaing Gargoyles but as we no longer have that formation theeres no point. Also three Tyrants is less of desire with more unit options available but this on it's own I think is worth £14, thanks to the bits already in my collection. 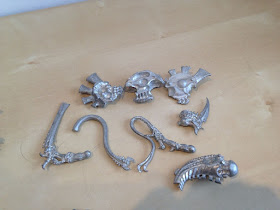 But also a couple of plastic Termagants, plus two original metal gaunts. 4 Hormagaunts and some Hive Nodes [always useful]there were even some Carnifex heads, a carapace and Crushing Claws! 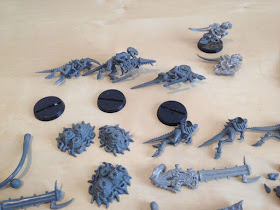 A load of carapace armour pieces, Flesh Hooks and six Rippers and whatever that metal thing is in the middle [ironically some Zoanthrope back vents that would fit the ones missing on my second Zoie!]. 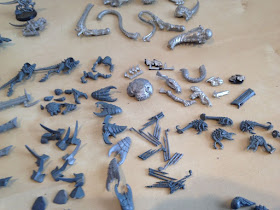 Plus extra Deathspitters to add to my conversion plans. Spinefists - I couldn't give a F*#~ about pistols zero use to me, they'll join the rest of them - perhaps I should just make a reclamation pit with them in ;) 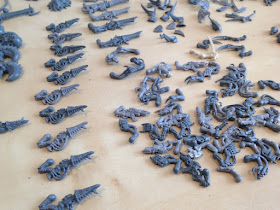 And the final bonus in thiss haul - Genestealer heads and look at all those feeder tendril heads! I could sell those individually at £2-£2.50 each. But with 4 of them I'll put together a Brood that matches the one I already have and then swap it out for a brood of their own. 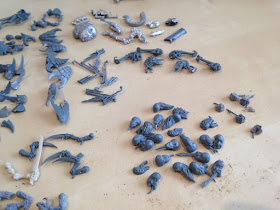 So a little over £20 for a lot of bits that actually is worth far more than it initially seems.
40kaddict at 12:08
Share