We like a good dice box/rolling tray in our house. It's funny, when I first got back with my gaming crew rolling dice in a box was what I did with the kids to avoid arguments, the fact Ben, Liam and Otty were also operating the same system, probably for the same reasons goes some way to illustrate how fraught those games could be. I like to think there's a more relaxed approach nowadays 'win at all costs' is no longer an issue. That said the box still has it's place and I was really impressed by Ross Graham's tutorial on how to make one and then Nick over at the Burning Eye did something similar.

However, good as they were they weren't quite what I was after. We're used to rolling in box lids, bigger and wider than thos box frames with plenty of run-up like a craps table. So I'd been looking at a variety of options [detailed at the end] but have created this option as a serviceable solution. We'd nipped to Hobbycraft recently and they had these 'Photo boxes' for just £2, which was a perfect price point for me. This was the best patter on the outside, the rest being pastel polka dots and gold embossing, shame they had now darker more urban looking one but ultimately it's a £2 shoe box! 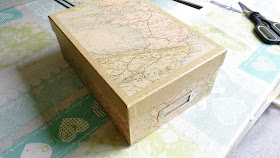 I also picked up four sheets of felt for 55p each [three was enough]. I chose black because I thought it'd show up my yellow dice beautifully. 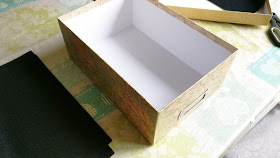 I then cut them to fit, layed on PVA glue, smoothed it out with a coffee stirrer and attached the felt. Now I'd done a few rolling tests and even with the felt there was a certain loudness to the dice I still wasn;t happy about. So I glued a sheet of my laminate floor foam underlay into the base first. 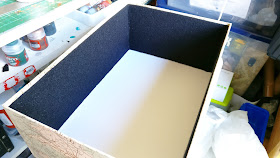 I then glued another sheet of felt on top. 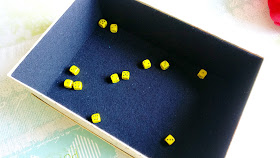 So the sides are reasonably muffled but then the base is perfect. Ultimately if I wanted a noisy dice roll late at night I'd still be rolling on my Realm of Battle board! I got so excited I did some videos, because all the cool kids use the YouTube.

And then I went and did a slow-mo

OK I got giddy again with the slow-mo


So I was really pleased with the results. As you can see from Ross, and Nick's interpretations, including my own there are plenty of ways to do this so here are the 'also-rans' for boxes I was considering if you want to try and make one yourself...

This box from the Works was my original contender and at £4 was nice prize but it would require painting on the outside too as well as getting the felt to line it. 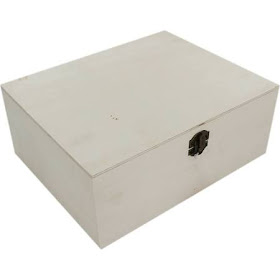 However I'd been distracted by a crate similar to this at Home & Bargain that I was going to remove the upper slats and then repin lower down and trim the bits poking up to make it an enclosed box. It was only £2.99 but they stopped selling them in the end, which led me to look at alternatives and seeing just the £2 box at Hobbycraft and the felt being right there too I just snapped it all up. 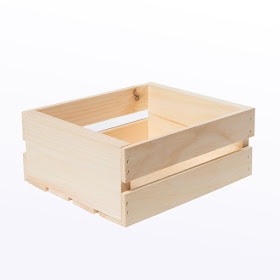