In a recent White Dwarf the editor Jes Bickham showcased a Winged Hive Tyrant kit bash to include the ever popular double twin-linked Devourers with Brain Leech worms. I have to say I actually 'fell in love' with the end result. By utilising some spare Tyrannofex Fleshboreer Hives he has been able to keep the Tyrant to being six limbed, including the wings and legs. Monstrous Devourers have always been a problem for those who wish to do Dakka-fexes and the like. Quite often it involves combining two or more Devourers together to get the 'monstrous' part. The real issue is that the Devourers that come with a Carnifex are exactly the same size as those that come with a Termagant, only the arms are bigger! Puny little guns in fat arms... 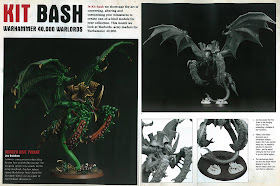 Part of my constant study of the kit bash was trying to come to terms with the sheer scale of the Devourers and whether the Tyrant could lift off the ground with them but I started to see the sacks as quite lightweight fleshy things and the conclusion I came to was that these make much better looking MC Devourers than a Fleshborer Hive, which I was never comfortable with as a representation, although I loved the design immensely, so I ended up buying this:

Now I've used the Winged Hive Tyrant a couple of times now and he's inordinately expensive and I'm not often going to use it but this I feel is my final treat to myself for painting so many 'nids, and before I fall hopelessly into Dark Angel mode - a final folly before 'the Rise of the Imperium' if you will. Saying that, I'll be looking to utilise some of the other bits and may look to magnetize them and my old Hive Tyrant so I can try out the Swarmlord too!

Anyway, a quick search on google [which you could do yourself but what the hey] and here's some other takes on MC Devourers: