My Son has had his Wraithguard since Christmas and as I've booked him a ticket to the GW North West gaming tournament in June he has to get 1000 pts painted by June 6th so we decided to put together his Wraithlord. Originally he wanted a Shuriken Cannon and Multi-laser but at the last minute decided to go with a Bright Lance and Sword, well that was it, I got very excited. I may have actually took over at this point I'm afraid to admit because I had a plan. In my defence putting the arms, hands and weapons on at the same time is quite difficult and he would have struggled greatly, I did.
Anyway the kit comes with a couple of foot and arm options which are nigh on the exact same positions that make up the basic kendo stance so I beseeched my son to allow me to replicate the pose. The basic stance is called chudan-no-kamae [there's pictures at the end to illustrate what the hell I'm jabbering about] this position is both defensive and offensive with the tip of your sword aimed at your opponents throat. Right foot forward, left foot back with your heel off the ground putting pressure on that left leg waiting for the moment to strike where all the forward momentum is derived from pushing off from the left leg. 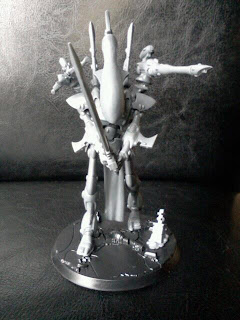 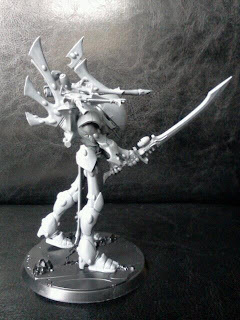 Unfortunately I couldn't quite get the pose perfect without extensive cutting of the arms so instead of the nice relaxed bent arms which would make the kensen [tip of the sword] point at the Wraithlords throat height I've used the straight arms. In actual fact this is another stance called seigan-no-kamae, seigan is a modified chudan, in that the kensen is raised slightly and to the side. This stance is used against people who adopt jodan-no-kamae, a purely offensive high stance, or nito, two sword technique. When your opponent is in jodan their left hand is raised and much closer to you than any other target so by adopting seigan you are much closer to cutting that hand off or alternatively thrusting for his now unprotected throat - a tsuki. 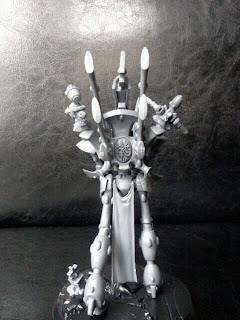 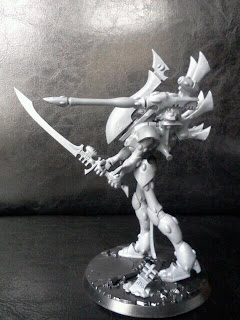 Chudan no kamae - nice and relaxed posture, left heel raised, seigan is higher and to the right.

Jodan no kamae - note the left hand to which your kensen, in seigan, would be 'covering'.

One other issue was the deal with the twin Shuriken Catapults. I didn't want to clutter up the Wraithlord's arms with guns so I devised a twin catapult mount. I took a flamer, cut the flamer bulb off, trimmed any mounting slots on the catapults and glued them either side of the remaining flamer mount. At this point a small piece of plastic shot off into my eye which prompted a couple of minutes of delicate wiping to remove the offending article. Perhaps I need to invest in some safety glasses... 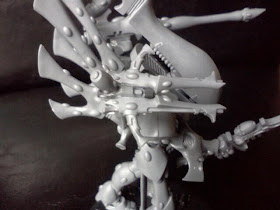 The mounted twin Shuriken Catapults. I also took the two arm vanes and in contrast to the examples on the box reversed them so they had a more aerodynamic look to them. 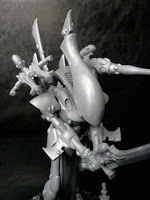 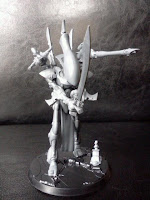 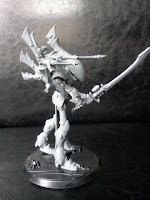 I'm pretty pleased overall, so pleased I want to paint it but I will try to let his nibs do it, hopefully he'll take some advice and time over it so we get a decent result, I really want it to be a centrepiece to his army, especially now it's factually correct, a bit at least.

Meanwhile, I didn't go to gaming night on Tuesday, I got a sweat on for some painting. 'Tackled' a new thing, which I still have to share and finally decided to do the heraldry on the Deathwing and eyes on folk. Suddenly all that procrastinating so I don't screw up didn't seem so bad as the end results are not what I'd hoped for :( Still, it's not finished yet I can keep them as is and if I really do hate the heraldry I can always go over it again. Damn those Deathwing freehand badges for making me think I could paint neat and tidy!
40kaddict at 12:49
Share