Here we have four of the Attack Bikes I had, of which I still have one, and a Jetbike. I have to say I did like this stile of Jetbike, certainly better than the original Rogue Trader model the just looked like, erm, Mothing really. The annoyring thing in this is the extra seat, just between the techmarines head and the multi-melta in the top left. Yep that's the seat I'm currently missing on remaining bike. 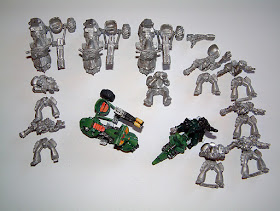 I'm pretty sure I knew at the time I had five of these but because these four were separate why I did not just keep that seat - 'just in case' I don't know. I don't think I regret selling them, they would be nice in my Ravewning but there's jsut too many of them and I'm struggling to fit in the bits I want as is. The fact they were all ridden by Techmarines would potentially be an issue if I cared about that but I don't. If I recall I got these from an independent game shop in Preston. We went in 6th Form to see the University of Central Lancashire and I think I ducked out at lunch, somehow found the place, remember this was before google maps, the internet and even photocopying street maps at the library was a challenge! And bought the five of them. Not sure what these babies cost in '92/'93, £2.50 each, £3.99? I had more money than sense back then. 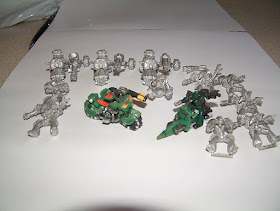 This was the odd one out, in that it had the recessed handle bars which I wasn't a fan of but didn't have a choice in the shop, you got what was on display. Again this was the paint job before the Ravenwing was revealed as all black. My Chaplain, Brother Infernus, is reposted below so you can see where I was at. However, for some bizarre reason I went with a reversed out white with green rivets on the armored plates on the side of the tyres, what was I thinking? 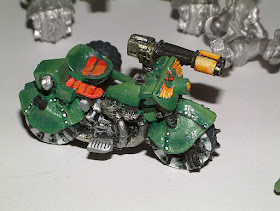 The Techmarine on Jetbike. I'm a bit confused by this because he looks like he's been undercoated black but also primed with my Green Car Spray Paint. But why is his hand not primed [perhaps I was holding it there as it was sprayed] and why are some bits still showing the black undercoat? So many questions although I don't suppose it really matters now. Love his big Techmarine claw shoulder-pad. Doesn't exactly fit fluff-wise nowadays but I'd imagine they'd be perefect for Iron Hands Successor Chaptors such as the Red Talons or the rather more stupid looking [but better named] Brazen Claws, especially with all thother tech gubbins built into the armour. 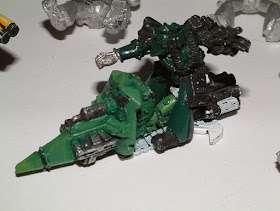 Old school Space Marine Chaplain, on a bike! Brother Infernus to the rescue. This guy was supposed to zoom around the battle field dropping Vortex grenades like the easter bunny. 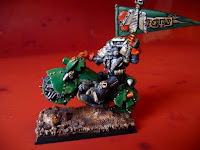 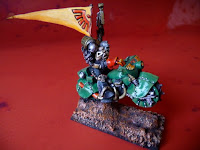 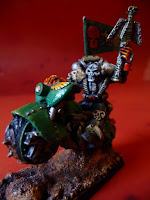