You may recall my recent obsession with Dawn of War. Dark Crusade has been filling my evenings and been both pleasurable and more recently a pain. What can I say I think the only race I enjoy fighting are Necrons because they move so slow you've plenty of time to build your force to bring the might of the Imperium down on them. 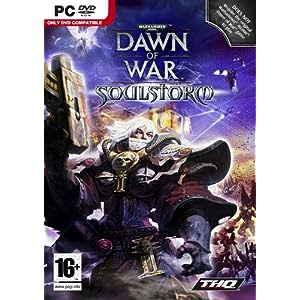 Anyway I've been keeping an eye out Dawn of War - Soulstorm

and there have been a number of half decent offers but the other weekend I had to nip into my local town to drop off some bits at the charity shop. There's loads of charity shops where I live, they get special business rates, so I believe, so there are around a dozen but mostly I drop my stuff of at Barnardo's. Not sure why I choose that one, but I have a Gift Aid card filled out so it's better to know they're getting a few extra quid than going to another charity shop where I have to fill in the forms again. Whilst I was there I noticed a copy of Artemis Fowl that I thought to pick up for my son but when I turned back some bozo was hogging the book section so I decided to just get on with my shopping.

I nipped to a local hardware store to pick up a 1mm drill bit to drill out some bolter barrels. I'd got a 2mm one recently because I like the idea bolter shells are massive but one of my AoBR bolter barrels had split so I decided to invest in a smaller bit. What surprised me is that you don't really need a pin vice to do this sort of work in plastic. In fact I'd say it would be far clumsier to do so with one.

Next stop was to the local art shop. I wanted to pick up some finer brushes for line highlights but on the way I passed Age UK a charity shop I'd be hard pressed to ever say I've entered but as I'd been blocked by one guy already I thought I'd just have a look what they had to offer. So it was that me and the littlest nipper perused the shelves and typically there was also a collection of Playstation 2 and PC games and what's this Warhammer 40,000 game? Well it couldn't possibly be Soulstorm the sole remaining title I need to complete the set... surprise, surprise indeed it is! And what extortionate price might it be? £2.50 you say, well it is for charity. So I did my bit for the old folks maybe they get a blanket, or Horlicks or some't and I've got my game.

Short story long, but on a side note I also dropped the Tyranid Prime and his head snapped off! Hopefully my patch job should save him but I may end up having to pin it with a heat weld, time will tell.
40kaddict at 12:58
Share