Afternoon #WarHamFam and #WarhammerCommunity I've been #PaintingWarhammer #DarkAngles #Ravenwing Attack Bikes & Black Knights... I know it seems like I haven't been hobbying and that's partly true, but I have done some things, just haven't written about them yet. Anyway, this is the metallics on all the bikes.

There were some slight changes to the recipe - Army Painter Rough Iron > VGC Hammered Copper > Citadel  Retributor Armour > Citadel Runelord Brass. The Runelord is'.t as light as the mix of gold and silver I usually do but the further sepia wash blends [obscures] it all anyway.

Having drybrushed and sponged the metallics on I then touched up all the back to make it tidy. Although bikes can be labour intensive, and attack bikes doubly so, 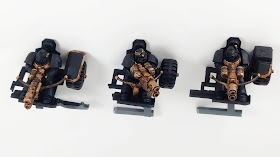 the Black Knights were also coming along. I even regret not getting my last 3 bikes 'Raven-blinged' up and to this stage too. The thought of tackling them further down the line and doing all this again is a little off-putting.

The Primaris Chaplain has kept pace though, even though I didn't want my Primaris force to have bronze as feature - they'll be silver as a significant counter-point to all my other armies. 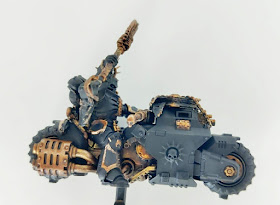 That said, although I don't want Primaris in my Dark Angels, I have the Redemptor because it's a solo unit and would be a centrepiece. For that reason I think this as a HQ choice can sit along old school figures because it's a standout model. 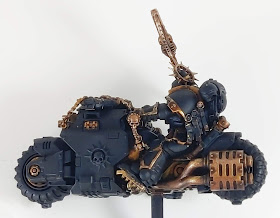 I do have 2 other old skool Chaplains on bikes though so I can have them consistent if I want.
Question: I need to put a Ravenwing banner on the back of this bike, don't I?
With these ready for their Blessed Verdigris I ran out of momentum and switched to some terrain...
40kaddict at 12:00 2 comments:
Share

Afternoon #WarHamFam and #WarhammerCommunity I've been #PaintingWarhammer ... honestly I have! Just not very much and the items I have been painting show limited progress and are difficult to take pictures of, so I've had little to post about. Anyway, I haven't shared any of this since my Big Build TO DONE! and that was pre-COVID! In truth I'm not sharing much this time, just the one picture. This had been primed and basecoated for a couple of years now and somewhere among my Tyranid Warriors and Ravenwing Talonmaster I painted the white armour. I'm pretty chuffed with the results, if I'm honest. It's really odd as I know this will look awesome when I finish it but I just have zero motivation to do so. 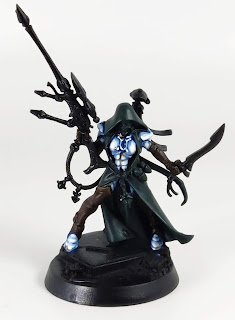 We're not playing BSF and there's no rush to get it done, not to mention I do have much higher priority models on my TO DO list. Maybe it'll be something where I just do the green or the brown inbetween other jobs. The gun will be black so perhaps tack that on with some Ravenwing stuff that I'm currently working on, when I get past the metallics stage that is!
Anyway, short and sweet. I've a couple of updates to share with you when I can find time to write them. My son is back to uni next week so I should have more hobby time to push on and complete some projects with a concerted effort.
40kaddict at 12:00 No comments:
Share
‹
›
Home
View web version